I've been following, and occasionally participating in, a fetish troupe out of Northeast Florida, the Infernal Doll Factory, aka the IDF, since their beginning. They started, oh, I don't know, over 10 years ago, and they always put on an interesting show.  The March, 2015, show was no exception. The show had a wide range of performance genres: burlesque, fire-play, a tribute (or so I'm guessing) to 50 Shades of Grey, to other various fetish performances.

There were a few sets that stick out as particularly good from the night. The first one being the classic burlesque performance done by Envy Inferno.

One of my favorite sets from the night was by the guest performer, Envy Inferno. She converted a vinyl bodysuit into a fantastic replica of Catwoman's catsuit and put on a fantastic performance.

I've been following her on Facebook for a while and knew that the was planning something special. I'd seen sneak-peeks of her outfit and seen posts about how difficult it was hand stitching the details of a costume for an upcoming show. I had no idea it was going to be for a guest performance for an IDF show. Typically, I've only seen her perform along other, more classic-style, burlesque performers.

It was obvious from the time the curtain opened to reveal her lying on a fur blanket that she put a lot of time, effort, and pride into her outfit. The fit, the beading, and the stitching were spot-on!

Her set ended with her pouring a bottle of milk over herself. It was a  great way to end her set.

The next set was a classic dominant / submissive set put on by two of IDF's female performers. When I talked to one of them earlier in the night about the set she would be performing, she let me know that she'd be the dominant in the relationship and using a riding crop to whip and hit her submissive partner.

When I asked if she was concerned about using too much force, she laughed and said "no, I honestly don't think I could hit her too hard. She likes it." then smiled and went on her way.

I'm not sure it was intentional or not, but the submissive wore a cat mask, collar, and tail, which tied ( <-- see what I did there?) in nicely with the Catwoman set.

Later in the night, came one of my favorite subjects to photograph, a fire-spinner.

Carlos is a multi-talented performer. Not only does he perform various acts with the IDF troupe, but he also occasionally takes on the roll of makeup artist.

One thing to remember, when going from photographing performers that you don't want to be blurry, to shooting a fire-spinner, where you want to capture the blur of the moving flame, is to switch your shutter speed to a much slower speed.

I think I went from around 1/100th of a second for shooting the earlier sets to a full second for the fire set.

I haven't seen the movie, nor have I read the books, but I've heard enough about it to be left with the feeling that this next set was the IDF's take on 50 Shades of Grey. Only, in this version, the girls take control; and ultimately kill the professional male.

The show started with a man dressed in professional attire interacting with two women dressed in leather and vinyl. After a few moments, he led them to another part of the stage where they slowly removed his blazer and vest.

This led to some knife play where the ladies drug knives across his body, before ultimately "killing" him. 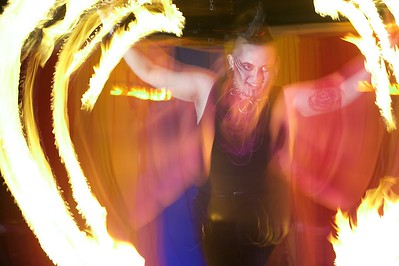 And while I'm not entirely sure if there was a particular theme to what I'll refer to as the chandelier set, it was visually interesting.

There were two girls, one in panties and electric tape, and the other in a bra and panties. They were  strapped to a suspension bar, facing each other. Each then held three candles, one in each hand and one in their mouths, for a total of 6 candles.

I've had an idea involving a human-chandelier for a while now, so it was nice to see other people's take on the idea. Hopefully the reminder of the idea, as well as the getting the camera out again, will inspire me to follow through and finally get the project started.

The stage show ended with an audience participation set, which also happened to have provided one of my favorite shots from the night. It's a great way to bring up the tail-end of this post.

Comments are always welcome and appreciated.